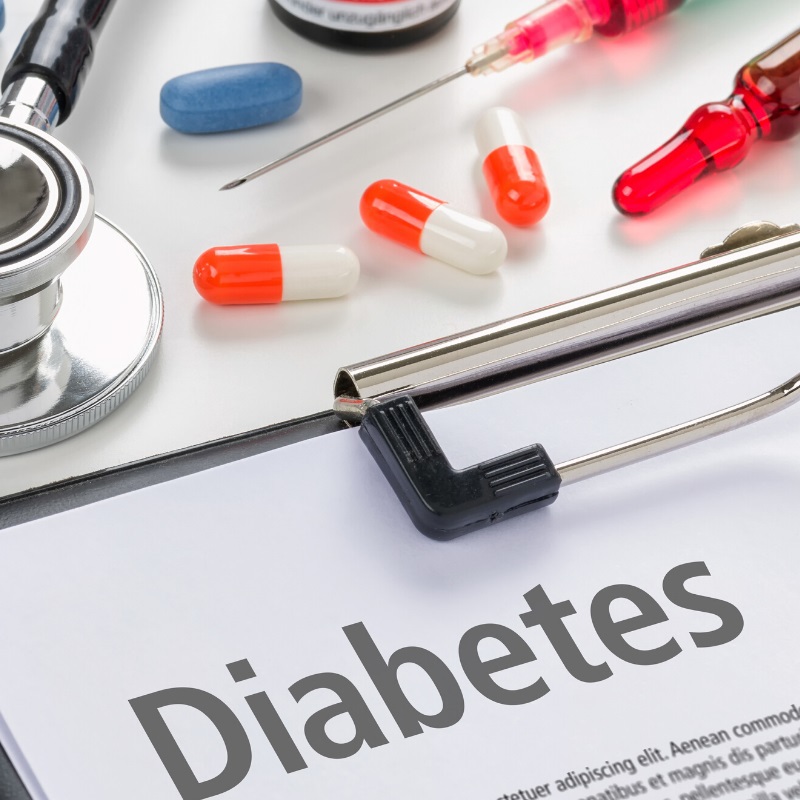 Diabetes Mellitus is also simply known as diabetes. It is the disease characterized by a malfunctioning metabolism and a high blood sugar level.

These symptoms though may not be present in those people with only mildly elevated sugar levels.

Diabetes mellitus includes type 1, type 2 and gestational diabetes, which occur only during pregnancy. Each type has a different cause and different severity of symptoms.

But all forms of diabetes are dangerous if not treated. With proper management though, people with diabetes can live a long, healthy, normal life.

The main cause of type 1 diabetes mellitus is the loss of insulin producing cells in the pancreas. This ultimately leads to an insulin deficiency.

The common treatment for type 1 diabetes mellitus is daily insulin injections to replace the insulin the body is not producing properly, along with careful blood glucose monitoring.

Without careful monitoring and treatment, complications from diabetes could include loss of limbs such as arms, legs and feet, blindness and diabetic comas, which can be fatal.

It is extremely important that if you suspect you or your child to have symptoms of diabetes, that you visit your doctor to be tested.

If the tests are positive it is not the end of the world. With careful monitoring and care, type 1 diabetics can live long healthy lives.

The Link Between Alzheimer’s and Diabetes

According to a new study, diabetes and Alzheimer’s diseases are more related than everybody thought.

Some researchers believe that Alzheimer’s could be a form of diabetes, because findings show that insulin production in the brain declines as Alzheimer’s disease advances.

Through a series of experiments, a group of researchers discovered that the brain produces insulin and that this substance produced by brains of patients with Alzheimer’s illness tends to fall below normal levels.

For the neuropathologist at Rhode Island Hospital and professor of pathology at Brown University Medical School, Suzanne M. de la Monte, “insulin disappears early and dramatically in Alzheimer’s disease and many of the unexplained features of Alzheimer’s, such as cell death and tangles in the brain, appear to be linked to abnormalities in insulin signaling.

This demonstrates that the disease is most likely a neuroendocrine disorder, or another type of diabetes”.

During the early stages of Alzheimer’s disease, brain levels of insulin and its related cellular receptors fall precipitously, as her group of researchers explained.

They believe that Alzheimer’s might be a new form of diabetes since the evidence shows insulin levels continue to drop progressively as Alzheimer’s disease becomes more severe.

The team led by de la Monte also found that low levels of acetylcholine are directly linked to this loss of insulin and insulin-like growth factor function in the brain. Acetylcholine is a hallmark of Alzheimer’s disease.

The researchers team autopsied the brain tissue of 45 patients diagnosed with different degrees of Alzheimer’s called “Braak Stages” and compared those tissues to samples taken from individuals with no history of the disease.

Diabetes and Obesity can Cause Depression

Many people suffer from depression at some point in their lives and people with diabetes  are no exception. If you are obese and have type 2 diabetes you may blame yourself and your lifestyle on the disease you now have.  It is hard to adjust to a new lifestyle.

Feeling  down or guilty about this is okay and even normal but if it turns into something more you need to seek professional help.

It is normal to feel down about having diabetes in the beginning but once you learn more  about the disease and how to control it you can also feel more in control of your life again.

If your feeling of being down or hopeless will not go away and is accompanied by any of the following as well you may be depressed.  If this is the case, contact your doctor right away.

If you are experiencing any of these symptoms you seek help.  Being obese and diabetic can be trying both mentally and physically.  It is important to know that you can take action to make things better.

Your diabetes may never go away but you can certainly keep it under control and live a full life.  By losing weight, even a small amount, you can make a huge difference in your health and diabetes.

There are large numbers of scientific research findings to confirm the effectiveness of plant foods in managing this disease.

Through the centuries, more than 400 plants have been identified, used, and prescribed as diabetic remedies.

There are large numbers of scientific research findings to confirm the effectiveness of plant foods in managing this disease. Through the centuries, more than 400 plants have been identified, used, and prescribed as diabetic remedies.

Raw onions and garlic have long been favorite anti-diabetic drugs in Europe, Asia and the Middle East.

The vegetable bitter gourd and the herb ginseng have been widely used for treating diabetes since the ancient time in India and China.

Common mushroom is widely used in parts of Europe to lower blood sugar. Barely bread is a popular treatment for diabetes in Iraq. Other foods, used in different countries, in the treatment of diabetes include beans, cabbage, cinnamon, coriander seeds, cucumber, fenugreek seeds, Indian gooseberry and lettuce.

All these foods have anti-diabetic properties. Scientific research has confirmed that most of these foods, or their compounds, either lower blood sugar, or stimulate insulin production.

Some of the more important foods that help to lower blood sugar or stimulate insulin production in diabetes patients are discussed here.

Artichoke is a tuberous root with a top like a sunflower. This vegetable contains good amounts of potassium, a fair amount of calcium and some iron and sulphur, all of which are needed by the body for maintaining good health.

Artichoke is beneficial in the treatment of diabetes because of its high insulin content. A fully ripe artichoke is said to contain more than two percent of insulin.

Ripe artichokes are generally available only during autumn or fall. The insulin is converted into sugar in winter. Artichokes are most effective when eaten raw in salads.

It is required; they should be boiled, unpeeled, in a small quantity of water for about 10 minutes. Artichokes can be effectively combined with other vegetables.